Addiction begins with solving a problem, the problem of human pain, emotional pain

“Understanding where most of my pain and distress originated from was one of the keys that open the door for long term recovery. Had I not gone back and dealt with my childhood trauma I would still be hopeless and helpless.” ~Nick Wildrick, Co-Founder GoForth Recovery 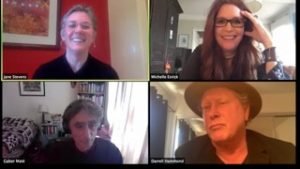 In his groundbreaking book, In the Realm of Hungry Ghosts: Close Encounters with Addiction, trauma and addiction expert Dr. Gabor Maté writes, “There are almost as many addictions as there are people.”
ACEs Connection founder and publisher Jane Stevens read that quote as a springboard to asking Maté to define addiction and explain whether or not it is always rooted in adverse childhood experiences. Maté, along with filmmaker Michelle Esrick and Saturday Night Live star Darrell Hammond, engaged in a discussion on May 21 entitled “Cracked Up: The Evolving Conversation — Trauma As The Root Cause of Addiction.” About 4,000 people from around the globe tuned in from as far afield as Canada, New Zealand, and Greece. The conversation was sparked by Esrick’s film about Hammond, Cracked Up: The Darrell Hammond Story.

“Addiction begins with solving a problem, and the problem is that of human pain, emotional pain,” said Maté. “The first question is not why the addiction; it’s why the pain? And from my perspective, it’s always rooted in childhood trauma, either overt or covert.”

Maté went on to explain that covert trauma may be unintended. Borrowing a phrase from trauma expert Bessel van der Kolk, he said it is caused by a child “not being seen and heard” by their parents. “Not because their parents don’t love them,” he added, “but because we no longer parent in an environment where parents are supported by community. So, parents are distracted, busy and stressed and emotionally overwrought. And as much as they love their kids, they cannot give their children that sensitive, reciprocal serve-and-return attention that a child’s healthy brain development actually requires.” (For an example of how “serve and return” works in practice see this video.)

For Hammond, the emotional pain associated with his addictions were linked to overt childhood trauma. In the film, he recounts how he pieced together details of the severe abuse he suffered in childhood, which had been locked away from his conscious memory. Nevertheless, those memories spawned an array of negative coping strategies, including drinking, doing drugs, and cutting himself to relieve an inexplicable suffering.

In one clip from the film, Hammond describes being in his studio at SNL and falling into a dark zone. There’s a flat-palmed knock on the door, the color red flashes in his eyes. “I cut myself, and the thumping [on the door] and the red went away,” he said. In therapy with a trauma therapist, Hammond eventually learned that the red flashes he saw—then and repeatedly through the years—were associated with blood from an injury his mother inflicted on him when he was four years old.

“Over the years as the [red] flash got more intense—because I was getting closer to the truth,” he says in the film. “The cuts got larger and deeper,” and clips of SNL skits zoom in on his arm, revealing a cascade of red scars.

If the link between addiction and trauma is now clear, the acceptance of that connection has been all but absent in treatment for addiction. That’s what compelled Esrick and Hammond to push Congress to pass legislation to ensure that trauma-informed practices be incorporated into drug and alcohol treatment. Stevens asked Esrick about their visit to Congress that helped forge the passage of the SUPPORT for Patients and Communities Act.

In two days of visits, she said, she and Hammond spoke with representatives who were aware of the Adverse Childhood Experiences Study and how trauma is tied to addiction.

Adverse childhood experiences is a term that stems from the landmark Centers for Disease Control and Prevention/Kaiser Permanente Adverse Childhood Experiences Study (ACE Study) of 17,000 adults that found a relationship between 10 types of childhood traumas, such as any type of abuse or neglect, and adult-onset of chronic health conditions. Many other types of ACEs — including racism, bullying, a father being abused, and community violence — have been added to subsequent ACE surveys. (ACEs Science 101; Got Your ACE/Resilience Score?)

The epidemiology of ACEs revealed in the ACE Study are one of five parts of ACEs science, which also includes how toxic stress from ACEs affects children’s brains, the short- and long-term health effects of toxic stress, how toxic stress is passed on from generation to generation, and research on resilience, which includes how individuals, organizations, systems and communities can integrate ACEs science to solve our most intractable problems. Research has shown how interventions — such as parent education, family therapy, building resilience, providing children and families with basic needs — can offset the impact of toxic stress from ACEs.

“We told them our stories,” said Esrick, who has been in recovery for addiction for 35 years. She said that she has found solace herself in 12-step programs, but that such programs still have a success rate of just 10 percent. They also have no trauma-informed component, which is apparent in the stigma that she and others internalized.

“We were all beating ourselves up about our addictions,” she said. “There’s just so much shame around the behavior.”

With respect to shame and how it filters through the 12-step program, Stevens read from the appendix of In the Realm of Hungry Ghosts, in which Maté has inserted comments next to each step reflecting a trauma-responsive tenor. “Step 5 says, ‘We admitted to God, to ourselves, and to another human being the exact nature of our wrongs.’ And Maté’s comment was: ‘With compassion for ourselves, we fully acknowledge what we have found in step four. Communicating the information—to ourselves in the form of journal, or to some other human being—makes our moral self-searching into a concrete reality. Shame for our actions is replaced by a sense of responsibility. We move from powerlessness to strength.’”

“In my own journey,” said Stevens, “shame goes back to what you were saying about covert trauma. It’s embedded so deeply that it’s hard to grapple with. And what makes it so confusing for our brains is that we have shame for things we didn’t do and had no power over.”

“Shame is a devastating sense of one’s unworthiness,” Maté responded. “And it has a biological basis to it. It’s an over-activation of the parasympathetic nervous system that looks like this: Your eyes are averted, your neck slumps, your head looks down. Your body just wants to sink into the ground. You can [cause this physiological response] in little babies who have no sense of wrongdoing. And you do it to them by breaking contact with them,” he says. “Shame is a physiological response to disconnection from nurturing.”

And in what may seem at first to be counterintuitive, Maté explained how shame is a survival mechanism for a child experiencing any kind of abuse from a parent.

“When that [abuse] is happening to you, you can make two assumptions: One is, my parents are incompetent, unloving fools. Or I can assume there’s something wrong with me. Which is the safer assumption?” Maté asked rhetorically. And if the belief that something is wrong with you becomes ingrained, “it creates all kinds of suffering and dysfunction, as we all know.”

Indeed, a major turning point for Hammond was a seismic shift in perspective about the source of his distress.

“The thing that kept me alive,” he said. “The hallelujah moment was the idea that I was this way because of something that happened to me. That mental illness is not an airborne virus. It has a story. And I was the only one without power. When I learned that, I stopped cutting.”

To find out how you can access a recording of this webinar and information about the documentary Cracked Up: The Darrell Hammond Story, go to: crackedupmovie.com